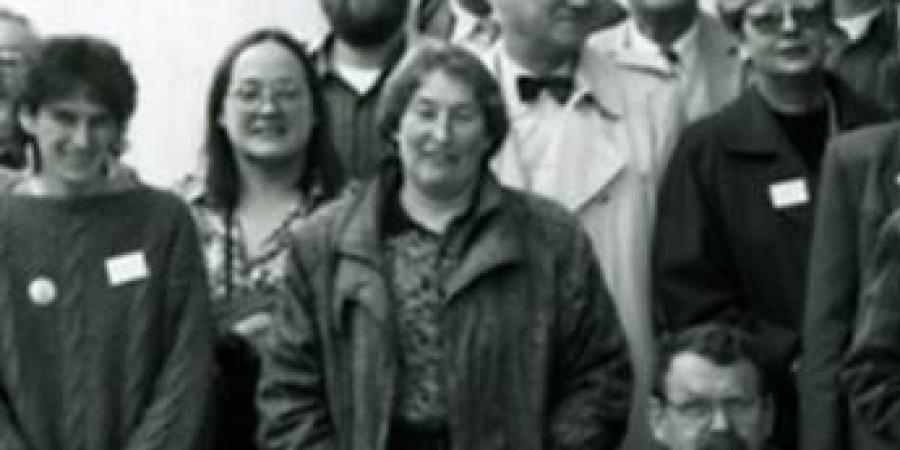 BABAO is saddened to hear of the passing of Dr Ann Stirland, but are happy to be able to present an obituary kindly prepared by Professor Charlotte Roberts. We thank Charlotte for her time and care in putting this together and providing the photos: 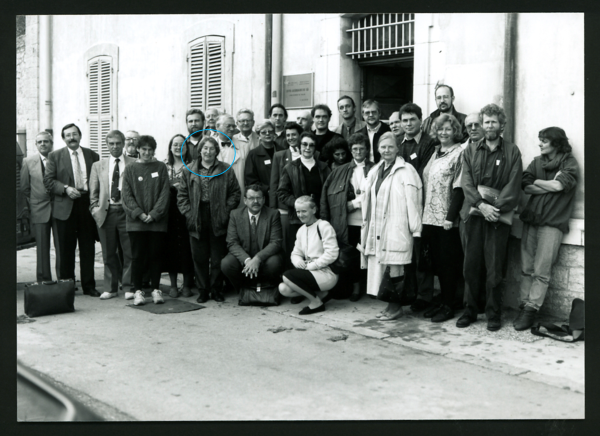 "First, I am not necessarily the most appropriate person to write this obituary – it should have been Juliet Rogers and/or Tony Waldron, but sadly like Ann they are not with us anymore. There are also very few bioarchaeologists working today who remember Ann. Therefore, my grateful thanks go to Lynne Bell, Margaret Cox, Clark Larsen, Louise Loe, and Jackie McKinley, for helping me out.

The first time I properly met Ann Stirland was in 1984 at the 5th Paleopathology Association European Meeting in Siena, Italy (Stirland 1984). I had only just entered the field of bioarchaeology (1983), a field that comprised a very small number of people in the UK at that time, and very little training available. Ann welcomed me into the world of bioarchaeology and was very kind following my first conference presentation there. As for Ann’s presentation (Os acromiale and occupation in the burials from the Mary Rose), I recall that there was a power cut at the conference centre not long after she had stood up to deliver her paper, but Ann continued regardless in the dark with no notes or (35mm) slides! This was typical of Ann: determined and stalwart, if not a little daunting for me as a junior colleague!

I believe that Ann’s early encounters with bioarchaeology were when she took an osteology course hosted by Bill Bass at Kansas State University, USA in 1971. It was at the time when she travelled with her husband Derek Stirland, a physicist, to Kansas State where he was a Visiting Professor. By chance, Clark Larsen, then in his freshman year (1st year undergraduate), was also taking the very rigorous 14-week course. He says: ‘We had a great time learning osteology from William Bass, then a visiting professor from the University of Kansas and soon to head to Tennessee.  At the time, I had a plan to become an archaeologist, but like Ann, our paths moved in the direction of human osteology and what we now call bioarchaeology. Since then, I have followed Ann’s work but our paths never crossed after 1971………that was such a great year and great time in knowing her. I can say we learned osteology together, taught by Bill Bass. I have followed her work since, and was always pleased to see what she was doing in print. Her Raising the Dead book (2000) was really interesting.’

Ann returned to the UK and then embarked on an undergraduate BSc Archaeology and Geology (Combined Studies) as a mature student at the University of Leicester, graduating in 1974. In 1982 the 1545 Tudor warship, the Mary Rose, commissioned during Henry VIII's reign, was excavated and lifted from the Solent in 1982, a tidal water just off the south coast of England. Ann was commissioned to analyse this unique context of human remains, and at times she recruited helpers (I was one) to help her in return for delicious food grown in her Northamptonshire village garden and of course great company. Ann produced her report on the Mary Rose skeletons in 1985, and she subsequently spent many years publishing this work as a series of papers, and eventually as two books in 2000 and 2005. Along with the Mary Rose skeletons, Ann produced other reports, notably that for St. Margaret Fyebriggate in combusto, Norwich, Norfolk in 2009 where she had identified pre-Columbian treponematosis in some skeletons (Stirland 1991a), and a number of papers covering topics as varied as decapitation in the Romano-British period (Bush and Stirland 1991), Paget’s disease (Stirland 1991b), and the earliest evidence at that time of tuberculosis in Britain (Stirland and Waldron 1990).

In 1992 she graduated with a PhD from University College, London, supervised by Don Brothwell (Asymmetry and Activity-Related change in Selected Bones of the Human Male Skeleton). Prior to her graduation, in 1990, she and Tony Waldron co-founded the International Journal of Osteoarchaeology (IJO) and they co-edited it until 2001 for Tony, and until 2002 for Ann. In her last editorial for the journal in 2002, she said, in true form: ‘We formed the journal together and worked hard and willingly

on it for ten years, with much laughter and a quantity of red wine!’, but it is worth looking back at the editorial for the first issue of the first volume of the journal. Tony and Ann said: ‘By presenting a good scientific journal with a high standard of papers and research notes, we can seek to influence archaeologists as to the importance of the need properly to excavate, curate and study human and animal remains, and to convince the developers who will be funding the projects of the importance of such remains to the understanding of the past of the area in which they may be working. In this first issue, we have sought to demonstrate that this new journal is not just another vehicle for the reporting of human palaeopathology, but that its brief is much wider. The International Journal of Osteoarchaeology at last provides a forum for those who work with human and animal remains to have a proper, scientific voice. We should all use it, for the sake of the future of archaeology in general and of bone work in particular’ (Stirland and Waldron 1991b). As Ann finished her term, her editorial also reiterated another reason why the IJO was founded: ‘because we perceived a gap in the literature, particularly in Europe’ (Stirland 2002).

I am sure that many will agree that the launch of this journal was a landmark development, particularly for the UK, as a new venue for publication of papers on human and other animal remains from archaeological sites. Reflecting on part of regarding their editorial cited above (‘seek to influence archaeologists’), this is as relevant today as it was in 1991. Of course, since Ann and Tony’s editorship finished, the IJO has gone from strength to strength over the last 20 years with a series of editors, making it a popular outlet for many authors around the world. As

While I am sure I have not captured all Ann’s publications, much was produced from her analysis of the Mary Rose skeletons, as recognized above, and the project for which she is most recognized and remembered. This site was blessed with contemporary historical evidence (and a pretty certain cause of death) that provided Ann with the wherewithall to consider potential physical activity related changes in the skeletons (e.g. see 1984; 1991c). She was one of the early scholars focusing on this area of bioarchaeology and I highlight one of here papers (Musculoskeletal evidence for activity: problems of evaluation) where she concluded that ‘attempts to evaluate areas of muscle insertion either by measurements or by subjective evaluation are doomed to failure’ (Stirland, 1998:360). Much work in this subfield has of course continued to the present day, with methodologies advancing.

In spite of her sometimes coming across as a bit ferocious, she was a very kind, encouraging and helpful scholar to others starting out, including me. I therefore finish her obituary with some words from Jackie McKinley Wessex Archaeology): ‘When I commenced working in osteoarchaeology back in the 1980s Ann comprised one of the – then relatively few – major figures working in the field in the British Isles. Despite her ‘elevated’ position she was always approachable, & generous with her time & knowledge toward lesser mortals such as myself. She was a great support when I was working on the Spong Hill publication text, giving valuable editorial comment which greatly improved the quality of the text – kindly given and patiently explained – for which I have always remained always most grateful. A lovely lady, with immense good humour & a ready smile, & – as I recall – sparkling dress sense displaying elegance and individuality (she was also a jolly good cook!). A sad loss.’

Louise Loe (Oxford Archaeology) also remembers her dress sense: ‘colourful dangly earrings - parrots at the Maastricht PPA meeting I think!’ Margaret Cox, who was a PhD student at University College at the same time as Ann, and also supervised by Don Brothwell, recalls ‘her gorgeous smile, extreme self-confidence and often scathing wit plus of course her amazingly blingy jewellery! Only someone with her confidence could have got away with wearing it. She used to terrify me too but I respected her enormously for her work and significant contribution. I used to think of Ann, Tony and Juliet as a sort of triumverate’. Finally, Lynne Bell (Simon Fraser University, Burnaby, British Columbia, Canada) says “I too was doing my PhD at UCL when Ann was. But I first met her as an undergraduate at Bradford [University]. Ann helped me in my career many times, and dealt decisively with my (ahem) rough edges as a young scholar. She was erudite, mindful and funny, combined with a real seriousness about her work and the work of others. Ann was an impressive colleague and mentor, and a very cool person”.

May Ann rest in peace."

Stirland, A. (1984). A possible correlation between os acromiale and occupation in the burials from the Mary Rose. In Proceedings of the 5th European Meeting of Palaeopathology Association. Siena University Press, Siena (pp. 327-334).

Stirland, A. J. (1991a). Pre-Columbian treponematosis in medieval Britain. International Journal of Osteoarchaeology 1:39-47.

Stirland, A.J. (1991d). The politics of the excavation of human remains: Towards a policy. International Journal of Osteoarchaeology 1:157-158.

Stirland, A., Waldron, T. (1991a). Editorial. International Journal of Osteoarchaeology 1:1.

Stirland, A. J. (1993). "Asymmetry and activity-related changes in the male humerus. International Journal of Osteoarchaeology 3: 105-113.

Stirland, A. J. (1994). The angle of femoral torsion: An impossible measure. International Journal of Osteoarchaeology 4: 31-35.

Stirland, A. J. (1996). Patterns of trauma in a unique medieval parish cemetery. International Journal of Osteoarchaeology 6:92-100.